So you know how I told you last time that ladies 'be tripping'? Well, the full extent of this psychosis is definitely more far reaching than I had initially thought. Young ladies are literally running around and quoting this movie, verbatim, to men. Another friend of mine fell victim to the madness last week. THIS HAS GOT TO STOP YOU CRAZY B-WORDS WOMEN! Are you freaking kidding me? What has happened to originality and the ability to think for ourselves? I'm going off on a tangent here. Let's get to the real jare. 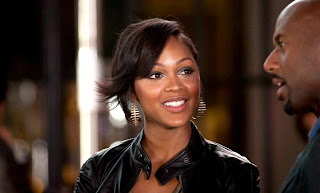 Mya and Zeke; Megan Goode and Romany Malco's characters respectively. Their role has been the biggest 'inspiration' behind the madness. Little spoiler if you haven't seen the movie; Mya and Zeke, to me, were the characters that ended up being the most improved characters in the movie. Mya was the girl who spread it around a little bit to easily, then Steve Harvey's gospel fell in her laps and she decided to reinvent herself by demanding respect for herself and her body. She decided to implement the 90 days rule; waiting 90 days before having sex with a guy and she demanded respect from her date ie making him open the doors to cars and buildings for her. The intent behind this was to cultivate the respect of a man early on. Zeke on the other hand, had suffered a heartbreak and had decidedly sworn off love. He was the quinisential 'Hit it and Quit it' Merchant... till he met Mya.

Mya, amazingly (but not suprisingly) got THE player fall in love with her. Let's examine how she did this, shall we?

This was textbook Mills and Boons. She read the book and took away points that were important to her personal development: respecting her body a bit more and adopting the 90 day rule as a screening device for men interested in dating her. The rest of the 'magic' was a function of her PERSONALITY'. She didn't take to living her life by the book. The book didn’t get her a man; some techniques from the book merely helped her showcase her true personality. In her case, she reserved no mystery. The sex was a distraction. Once guys hit it, they tended to quit it. They weren’t seeing the fact that she was witty, she was fun, she liked music, she had a warm personality. None of that. So she cut back on the sex and these things came to the fore. They were actually meeting her and not her coochie.

Some girls are running around this country believing that they just have to follow the letter of the book and some guy will see how 'acting like a lady and thinking like a man' they are being and then fling himself at their feet, ring in hand.
Ummm.....no....that’s not how it works, sweetie so let's cut the bull. Instead of thinking of how to personally improve yourself, you think the fact that guys have not been opening doors for you is why you haven't gotten married. Are we for real??? That's our biggest problem? I think not. Let me show you a HUGE problem....yes, it is bigger than having to get your own door. Trust me.

Zeke, like every man, when he wasn't getting what he wanted, grew tired and wanted to end the whole thing. He had gotten doors, paid for meals and he was still getting nowhere. So he wanted to pack it in. It is my opinion that at that moment, she became an 'unncecessarily loooong thing'. She must have just looked like a time waster that wanted to eat free food. But she changed that impression when she surprised him with a pre-planned date. (This was probably what home girl in the story I told you was trying to do to achieve. See how Mya waited a couple of dates before she bust a move? Well, that’s how it is done.) Mya kept it fresh and he couldn't anticipate her. Yes, it wasn't sex, but it was another side to a woman he probably had not seen before.

When it comes to doing nice things for men, Nigerian women we tend to fall in two extremes; the givealls and the givenots.
The Give-Alls: The women that put properties that have been in their family for years in their husband/boyfriend’s names. They have 20 bucks and cannot eat lunch but their boo needs 2.5M and they will beg, steal and borrow to make sure he gets it.


The Give-Nots: If you were falling off a cliff and you needed a 'rhymes with fork' to save your life, she couldn’t give a 'rhymes with fork!' She’s all take and no give.
We need a middle ground. We all tout that we’re a bunch of Miss Independents so we should be able to pick up a cheque once in a while. This simply shows that we are capable of being 'partners' in a marriage. A man wants a partner not a millstone.
Zeke wanted Mya's time and as ladies, we should be wooed. I make bold to say it is our God-given right to be treated to nice lunches and trips etc. But....we are not kept women. If you earn some bread, take your man out once in awhile. It is simply a nice thing to do and it shows that you are not a selfish gold digger. Mya went on a couple of dates, Zeke picked the cheques and one day, she flipped the script! Watch his little face light up when he heard‘tickets to see Usher’ . Do something meaningful for a man who is asking you out...it shows you in a good light.


Mya was also wise in making herself indispensable. Not by washing his feet or doing his taxes but she made herself useful in her own way. She helped push his dream in places he had no access to. I know it is neigh impossible to help some of these dudes running around achieve their dreams. They all want to be their own bosses with zero business acumen. The key thing here is seeing if there are ways you can help him be the man he desires to be. You don't even need to have the right connections; being able to cheer him on and share in his triumps and losses will make you the right girl.
And that’s where the question, ‘what are your long term goals?’ comes in. But here’s the thing, THAT WAS A MOVIE! None of those characters will go out in their real lives and begin a date by asking that question upfront. But that movie was 90 minutes long and they had to fit everything into the movie . Steve Harvey did not expect you to go out and lead with that question. He figured you'd do it with a bit of sense. There are ways to ask this question without really saying those words. It is called getting to know somebody. ‘what are your interests?’ ‘Do you enjoy your job? Do you see yourself staying there for the foreseeable future?’ ‘So what do you plan on doing after this?’ are other ways to ask ‘what are your long term goals’. Heifers be tripping!!!!
Someone raised a valid point on the last post and said why do you think he won't lie about his goals? As simple as this question is, a lot of the movie zombies don't seem to have considered this. YOU SIMPLY CANNOT AMBUSH A GUY WITH THAT QUESTION....ESPECIALLY NOT ON THE FIRST DATE. We are women, we are known for intelligence. If you must ask it, ask it intelligently. Notice that Mya told him about some of her dreams before moving to her main question. It wasn't the first thing out of her mouth at the jump.


Finally, she ensured her status was cemented before she gave up the cookie. Cookie could represent all sorts of things: your heart, your coochie, your time, your cooking, your ‘special’ things you do for guys when you are in a relationship with them. M’lady of the Soap and Feet, could have waited until her status as ‘girlfriend’ was cemented before busting out the pumice stone.
The whole point of the questions and the rules was to get the status. If you're simply percieved as an annoying movie parrot, trust me, you're not getting a second date, let alone the status or the ring. With everything we do, common sense has to be applied. Learn to bide your time. A guy coming to mess with a girl in her mid twenties KNOWS what she's after. They all just act stupid. He knows what you want so try not to scare him away with 'the crazy'. Quoting a movie verbatim, is most certainly top shelf crazy.
Mya wasn't going about hitting men with quotes from the book, she made the book work for her.

So what have we learnt from Mya?
That’s the crux of the matter. You need to make an impression. A ring interview and a job interview share a common trait: IMPRESSION! IMPRESSION!! IMPRESSION!!! When you've made the right impression, you don't need to cajole anyone to open doors for you, you'll simply be worth opening doors for and other things that happen when you have worth will happen for you.

Whatever you do, don’t make the wrong impression. I bet M’lady of the Soap and Feet has learnt her lesson.