To define or not to define.....that is the question 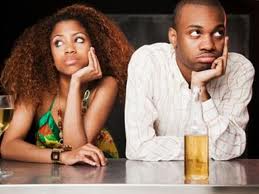 This is my first post written on my new BlackBerry. Excited much? Anybody?? Just me??? Oh....ok. Anyways, yeah, I can now write my posts on the go again! Yipeeeee!

So to define or not to define? What am I on about? Ok, let me tell you. Let's set the scene shall we?

You're at your friend's dinner party, thrown purposely to hook up her looser friends with her husband's looser friends. You're moseying along, drink in hand, making polite noises when thoughts and words are directed at you, just generally minding your own business and then you're spotted. A guy walks over and introduces himself as Khalid. You spend the whole night chatting with Khalid. Dinner party over but you and Khalid are loathe to leave each other. You duly swap pins and promise to keep in touch. You think to yourself; he's a great conversationalist and he's quite interesting. In general, it hasn't been a terrible night. No romantic alliances were made, but you have met a nice bloke.
Fast forward to 6 months later; you and Khalid are still very much in touch. You talk at least 5 times a day. You're on bb every second. You see each other every night after work. You have dinner every other night. You have drinks and go to the cinema almost every weekend. You go for weddings and birthdays, house warmings and baby showers, shows and designer markets as each other's plus ones, you've planned trips away together. He's not seeing anyone and neither are you. You bicker like a married couple, you're together like a couple but the question is; is he your boyfriend? Are you his girlfriend?

This scenario is something we've all experienced. The 'pseudo-relationship'. Not quite a relationship in the traditional sense but a relationship nonetheless. It is a funny sort of relationship because most ones that I've witnessed come with all the stress and trauma of a relationship but little or none of the rewards.

DJ is a very good friend of mine and she was in the most intense pseudo-relationship known to man (ok.....known to me) Let's call the guy Ben. DJ and Ben really liked each other at first. Due to his inability to commit, she went off with another guy but her heart was always with Ben. Needless to say, it didn't last with the other guy. DJ was soon back with Ben and the agony of wondering if he would commit. Ben was perfect for her, she thought, he wasn't seeing anyone and neither was she, he made all the right noises and they spent every minute they could find together. It soon became a sexual relationship. In a sense, it was your traditional relationship. DJ was the archetypal wifey. Cooking, cleaning up after Ben, ready to go to events whenever, always available for 'the nasty', knew all his friends, met his siblings etc. She got very 'comfortable'. She believed she was THE wife. It would only be a matter of time before Ben popped the question, right? WRONG! She confronted him at some point about the bevy of heifers always calling his phone and his answer, which was very short and simple, shocked her. He said 'we are not dating, DJ' Very eloquent....that Ben. She felt betrayed and was heartbroken. When she spilled her heart to me in agony and very much in tears, I hated to be the one to kick a devastated woman when she was down. But it was my moral duty as her friend. He's right, sez I. She looked at me with a stunned and betrayed look, I asked her to let me explain. The gist of what I said to her was that Ben was right. They weren't dating. She was just an 'enabler'. She enabled his commitment phobia. She was available to give him some ass, to clean his flat, to accompany him to events. She was on call at all times. The relationship was on his terms and suited him perfectly. He needed a 'sort of' girlfriend and wasn't yet ready for an actual girlfriend. And DJ was there enabling his ass. She thought that if she did things his way, he would see things her way. Yeah right.

This is just one way this kind of relationship exists. There are other subtle ones where you don't even think you're in a relationship. Not all of them have sinister under tones. Some guys really just can't come out to outrightly ask you to date them. They just hope that your friendship blends seamlessly into a full blown relationship. Whatever the motive, these types of undefined relationships tend not to favour the ladies, because we always want something more concrete.

So the question remains to define or not to define, when you find yourself in a situation that you can't particularly identify. Some people would say "if it looks like a duck and it quacks like a duck, then it is definitely a duck". I say, not in all cases. My ideal relationship is when both the guy and I understand the terms and conditions of what we are embarking on. Yup.....I'm that girl.....I like to have "the talk". I don't care how uncomfortable and embarrassing it is for you. We MUST have the talk so there are no misunderstandings. My sister says "what are you....12?" Well, I don't care. We need to be on the same page or someone needs to completely get out of the book.

What are the advantages of defining the terms of a relationship?
1. Exclusivity: not in the 'I own your ass' sense. Just in the 'not lulled into a false sense of security' sense. You can go out and say 'hey, meet my boyfriend'. It sucks to say 'I'm kinda seeing someone'. You're either seeing or you're not seeing. No 'kinda' anywhere.
2. You have the right to get angry when he steps out on you. If you're a kinda-girlfriend your confusion and inner turmoil as to whether or not you have a right to be angry obliterates the initial act that angered you.
3. At least you can hope (or comfortably delude yourself into believing) that you guys are going to go the distance.
In a proper relationship, along with its ups and downs, the biggest reward is the knowledge that in this cold, crappy world, at least you have someone to bitch to, throw things at, and cry inconsolably on their shoulders; essentially someone you call your own, who calls you theirs also. We all want to feel secure and a real relationship provides that security. It sucks when you feel you've blasphemed by calling someone your boyfriend. It sucks when you have to search their face to see signs of them being ok with being introduced as your man.

But let's not rain on 'not defining''s parade. It tends to favour the male demography but it could have its own unique advantages for the female that wants to play the field. Said female can 'date' in the actual sense of the word. I like the American concept of dating in its raw form; you can see as many men as you like. You're technically a single girl who is weighing her options. Kiss as many frogs as you like until someone drops the 'E' word ie, 'can we be EXCLUSIVE?' So, if the E word hasn't been dropped, the relationship has not been defined and you can enjoy yourself as a singleton, the way God intended. As it goes for men, no man who you're just 'seeing' can question your goings and coming cos, whorey as it may sound; he's not your man. He's just some guy you're seeing.

We need to be honest with ourselves as women. A lot of us are trapped in these pseudo-relationships and we don't know if we are coming or going. Don't be afraid to ask the hard questions. Don't be afraid to say 'dude, what are we doing?' One of three things could happen:
1. He could look at you with horror, mumble certain things that translate to 'you're pressuring me and I don't need this' and he will bounce.
2. He could stare at you in horror, fall on you with appreciation and say ' I've been meaning to bring it up but I didn't know if you felt the same way'
3. He could look you in the eye and say with a smile ' babe, we have an understanding'. At this point I expect you to slap the black (or whatever color he is) off him. The point is, you need to know. Don't let your feelings sucker you into having a non-relationship. Don't convince yourself that you shouldn't rock the boat cos everything is fine. Everything is NOT fine. You're not in a boat, you're dangling from the brow of a ship getting ready to fall into stormy seas. Rock that boat, muddy the freaking waters. Grow some lady-balls and man up. At least if you know now, you can get yourself. together and move on to another (hopefully) real relationship.You will be heartbroken for a while but feelings change with the wind. So if that relationship ends, tough cookie. As my friend UE once said to me; 'if he's not doing, he should get out of the way so that others that want to do can see'.

This I hold: if a guy likes you that much, he wants to take you off the market. If he is the shy sort, he will mumble some unintelligible things,which you may need morse code to decode, which essentially tells you how he feels. If he's not shy, he comes right out with it.  I'm not talking marriage now, I'm talking dating. People blend seamlessly into relationships a lot of time but more often than not, it is you building castles in the air. I'm just saying definition clarifies. That's my time.

Posted by CherryWine at 8:18 PM