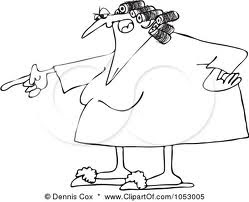 Hello everyone. Joan here....again. Where were we that last time? Ok.....where that mother of the devil was proposing that they carry me for sacrifice for the sacriliage of not getting married at 31. Ok, let me not break the gist mid-stream.

Mum: aunty, it hasn't gotten to that. I know my God is able. As He has done for her sisters, so He will do for her in Jesus' name. God will not....'

Mummy Uniben: Nkiruka, I said you should keep shut! I know what I'm saying.

Mama Ighe: If you and your mother are refusing to do sacrifice because of one Jesus, I have another idea. In my husband's place, when a woman is above 24 and she's not married, they make a special stool for her and put it in front of her father's house. She must sit there from morning till night so that everyone passing in their car o, on their legs o will see her. Rain or shine, she must be there until a man asks her what she is selling. Instead of you to be carrying bag every morning to go to work, I suggest your mother makes stool for you and puts it outside so men can see your market, ehn, Emilomo? Abi na?'

No people, Mama Ighe WAS NOT  joking. In her mind, she has offered solid advice that should be considered by all present as a valid course of action. My mother felt she had gone on long enough and she gave her another look that said 'SHUT. YOUR. BLOODY. MOUTH'. Mama Ighe, like I have already said, knows not to mess with my mother. My mum has 'brushed' her before. For you janded peeps, brushing means to physically assault someone. In this case, my mum didn't physically assault her, it was more like she beat her senseless!! I was a bit satisfied that Mama Ighe couldn't really dare my mum and the little talking she was doing was because of the dutch courage she was getting from her other sister-witches being present. Can these bitches get out of my house? Maybe I should say I am a lesbian and watch them all stare at both me and my mother in horror, before scrambling out of the house to spread the gossip to all and sundry. But I couldn't do that to my poor mother.

Mummy Uniben: This is not a matter of sitting down anywhere. Look here, don't you know what your mates are doing to get married, Emilomo? You are still expecting love at this your old age? Your mates are getting pregnant for men to force them to marry. You are going about believing in love. I've been married for 39 years. There is nothing like love. You need to open your eyes. You will be doing lagos girl up and down. Are Lagos girls not meant to be smart? You....you are the biggest dunce. It is either you trap somebody with pregnancy or you become second wife.

Mummy Uniben: Yes. Second wife. At this stage, I don't even care if it is third or fourth wife. All I know is, YOU MUST MARRY.

Mama Adokie: Are you not even ashamed of yourself? Ehn? They are suggesting everything, you are saying no,no, no. Are you not ashamed? You are here for your sister's wedding. Don't you want people to come to your own? You are looking for love. Sister has told you the truth. There is no love. Find someone to tie down. Do it by pregnancy or by juju or the two and do it quickly. My brother spoilt you. That's why you don't have sense right now

Look at the frustrated women offering advice. Women that didn't marry for love. I'm even certain that they used Mummy Uniben to clear debt. She looks like the trade by barter kind of witch. It was clear to me that all my father's sisters were unhappily married BUT they didn't think so. They believe they have achieved the ultimate female destiny and I was sorely lacking. I want to get married but not like these idiots.

Mama Lucy: Mschhhhheeeeewwwwww. Strong head for nothing. Fine for nothing, no husband.

These ones too had to add their own two cents. It was under their breaths sha o. My formidable mother was not above kicking ass there and then. Anyways, at this point, enough was enough. What a bunch of unfeeling bitches my father's sisters are. Do they think I'm walking about gleefully, excited about not doing the things my mates are doing like getting married and having kids? Do they think I don't sit in my room night after night and cry and really pour my heart to God? I don't know any other way. I'm doing all I can in my power. I am pliable, well mannered, I don't argue, I cook, I clean, I read Cosmo to find out what a mordern woman should do for her man, I read the Bible to find out how a virtuous woman carries herself. I cannot kill myself. My whole waking life is consumed by the conundrum of why I am yet to get married. I had had enough of these tired witches and I was just getting ready to explode when 'stupidity' came to my rescue

Mama Ighe: wait o. You are all saying she should trap the man, with the way this Emi is behaving like one dunce, can she even 'do'?

I burst out laughing. I couldn't help myself. Simultaneously, my mum jumped to her feet and let it rip

Mum: EME, LOOK HERE, IT IS YOUR CHILDREN THAT WILL NOT KNOW HOW TO 'DO'. IT IS THEM THAT WILL NOT KNOW WHAT TO DO WITH THEIR ORGANS. HOW WON'T YOU ADVICE HER TO GO AND GET PREGNANT SINCE THAT IS YOUR PROFESSION??DOMITILLA!!! AGARACHA!!!!  E BU AGARACHA!!!! BECAUSE I'VE BEEN KEEPING QUIET FOR YOU PEOPLE. YOU THINK YOU CAN JUST BE TALKING TO ME AND MY CHILD ANYHOW? EHN??? I HAVE HAD ENOUGH. I DON'T WANT TO HEAR ANYTHING AGAIN BEFORE I START CURSING SOMEBODY. LEAVE ME AND MY CHILDREN IN PEACE. I AM BEGGING YOU NOW O. AND YOU PEOPLE KNOW ME O. YOU KNOW ME WELL O EHEN. IT IS THE GRACE OF JESUS YOU ARE ALL ENJOYING RIGHT NOW.

Mummy Uniben: Nkiru, it is ok. Sit down! You cannot be shouting on my head. I am your husband's senior sister. Respect me, my friend!!!!  Eme, keep shut. We are all here for good. We don't hate you Emi. But you must marry and I'm giving you between now and next year to do it. Or else.....

She turned and looked at her sisters and said 'let's go'.

Having delivered her ominous proclaimation, she got up and left. Her sisters filed out the same way they filed in, after her. My mum and I looked at each other and breathed a sigh of relief. But it was all too much for me and I fell into my mother's arm and just sobbed for the longest time.

That was two years ago. I'm 33 now. I've gone over the 'time limit' allotted to me by Mummy Uniben. I'm going back to the village having flaunted her direct ultimatum. It is about to be a royal rumble and I'm sure this time around, not even my mother's stink-eye or her 'fight to the death for her children' attitude can save me from the 7 Witches of Irrua. I looked at my sister with a mixture of love, pride, sadness and trepidation; and I just thought to myself; Here we go again.....Anyways, bring it on!

Btw, I started dating someone new a few days ago......keep your fingers crossed for me, ok? And no, it is not the second wife option that was suggested.

Posted by CherryWine at 2:37 AM