My sister is 4 years younger than me. She's gorgeous, fun, interesting and extremely wise beyond her years. She says a lot of wacky things and sometimes, I ignore her verbal diarrhea. But, I've found that a lot of fun facts she tells me are actually not really wacky at all, but are in fact, true. My sister told me that no one can fart while sleeping. You must be conscious or semi-conscious to fart. I'm like 'whatever. It is an involuntary action'. But I started to notice that I was always sorta awake when I farted in bed. TMI???? I apologize.
When we were approaching the new year, my cousin and I were going through a lot of boy drama. The "should I or shouldn't I?" "He's stressing me" variety. My sister ignored our bitching for the most part. When the new year rolled around, we were having a catch up chitchat and my sister goes, "look, enough of the drama. If you guys are not happy, leave the relationships. Stop being so stressed. Our motto for this new year is Improvement or Recruitment"

See, wise beyond her years. Improvement or Recruitment. It really is as simple as that. Sometimes, the solution to our boy/girl problems is not necessarily sticking it out till things become better; which is the solution a lot of people want to go for or think they should go for. After all, I've said in the past that I believe patience is a key virtue that anyone who wants to go into a relationship long-term, must have.
But there are some relationships that haven't been built on the right foundation and are not built to last. If you're in a relationship and you're stressing about the whole thing cos the person is just not doing you right, do something for me. Think back to the last conversation you had and try to recall verbatim whatever it is you spoke about. Can you remember? If you can't remember abeg don't pop a fuse in your brain. (Btw, if you have the memory of an elephant and you can remember what you wore on 30th June 1991, this exercise might not work for you. #justsaying) Now think back to the last time you had sex. Can you remember that?
Ok, compare notes now. If your most vivid memories are your conversations, you may consider working it out cos conversations show a deep connection and a meeting of the minds. It may be worth giving it a shot with that person. If your most vivid memory is the sex, then you're barking up the wrong tree. Sex is purely physical, it is when you add other elements to it that it becomes elevated from just the physical to a soul connection. You're not doing anything special by having sex. I just deleted a picture of two dragon flies having sex on the wall of my building, from my phone ( I know.....a bit pervy) All I'm saying is, learn to prioritise and know what is important. If the relationship is going on with just your bodies and when you're out of touching range, you really don't know what to say to each other, I only have one question for you....Really????

This is not just for women ( I have been accused of being a bra-burning 'woman' rights activist) My darling brothers, you lot think you're so hard but when you fall, na die. You become simpering idiots. If you are dating a girl whose only talent in life is the ability to relieve you of your hard earned naira, biko, jo, please, si vous plait, inform her that she has to improve, in fact, completely renovate herself or you will recruit. Some girls are absolutely not for real and you guys can't see past their curves to the real intent. I need you to put the boob down, step away from her body and think rationally. Are you always buying and buying to prove your love? I am not against gifts. I LOVE gifts particularly unexpected ones. But if you're doing it because she expects it of you and it is a prerequisite for your relationship with her to still exist then you're what is known as a maga. If you're happy tho, let me not break you and her up.
If you have a girl who is not ready to commit the whole of herself to you but you would rather have half of her than none at all, then I suggest you call a few friends, form a search party and go and look for your self esteem. Do you think that lowly of yourself? It is time for her to improve or you get to stepping. Trust me for, every one shady girl, there are 5 loyal ones. You need to make up your mind to be happy. Being single is not an incurable disease. Take time to find yourself and find a great person who wants to share with you, pray with you, rejoice with you and love you. They are out there. Relationships are meant to provide you with companions that make you happy. That's the blueprint. That's why God gave Eve to Adam. If you're unhappy in yours, it is because you're in the wrong one so your blueprint is kinda wonky. 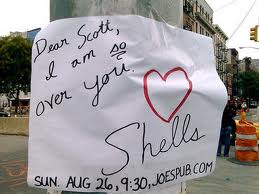 If you don't clear out the old, you will never make space for the new. Let me take that a bit further....if you don't clear out the old, you'll be blinded to the new. It is a mind thing. A friend once told me about this guy she liked who said he liked her too and even though she knew in her head that they weren't dating, she could not allow any other guy come close enough because to her, they were together. It sounds looney but an average girl is not cut out for double dealing and when we latch on to an idea, it gets so built up in our heads and we start to live in some kind of parallel universe where our idea is reality. Have you never thought you meant more to a man than you actually did? In the end, she discovered that it wasn't even that deep for the boy and she had to get rid of her foolish notion and it was almost as hard as being broken up with because she had to reorganise her thoughts and feelings.

My beautiful sister was right. I live in a country where the population is 154,728,890 (source: World Bank World Development Indicators 2009) and I insist on staying with a knuckle head who is not ready to commit. I deserve to be unhappy. Enough of my pop psychology. Today marks the end of June. By tomorrow, the year would have passed the halfway mark. It is time to stop flogging a dead horse by hoping for the best in your deadbeat relationship. You are 29 and your 'boyfriend' can't define what exactly the two of you are doing not to talk of what the next step is.....improvement or recruitment, my love. If you leave him now, that gives you July-December to sort a new man. 'It's so hard Cherrywine!!!!!' Shut up with your whinning! Visualise your ideal relationship (and be honest.....) Are you in it? If you're not, let's improve abeg. We should all make it a goal to be happy and take proactive steps to achieve the same as the year ticks to an end. Please, take my sister's advice. It is important.

As a cheery aside from all my nay sayings, this was hastily thrown together cos I'm off to Ghana tomorrow (see here to know how this came about) and I didn't want to miss my one post a week target :) Ghana! Ghana!! Ghana!!! Can't wait. I intend to have maximum fun. :D so catch ya larra folks.

Posted by CherryWine at 2:48 PM