Day 9 originally fell on the day the election results were announced. Like a lot of folks, I was demoralized. I stuffed my face with donuts and took to the bed like a character out of a Jane Austen novel. Later in the evening, I put word out that I would not be blogging, so distraught was I. A reader of the blog jokingly commented that he was looking forward to reading my rant on the incident. I wanted to rant, believe me, I just couldn't find the words. I was so sad I couldn't bring myself to do my daily devotion.

The next day, I decided to catch up on my devotion. I use the 'Everyday With Jesus' daily devotional. It is published six times a year and each little booklet contains two months worth of devotion material. The devotion materials were all penned by a man called Dr. Selwyn Hughes who died in 2006. The materials continue to be revised and updated by the guy who is now in charge of the ministry. The theme for the months of November and December is "A new perspective" and they've been breaking down Psalm 73.

I say all this to say, this was something that was originally written somewhere between 1965 and 2006 and the writer may not have anticipated the events of 8th & 9th November...but God did. The anchor text for the day was Isaiah 55:6-13 and the topic was "The root of some perplexities". To make what I'm on about clearer, I need you to check out the devotional material (excuse the scribbling) 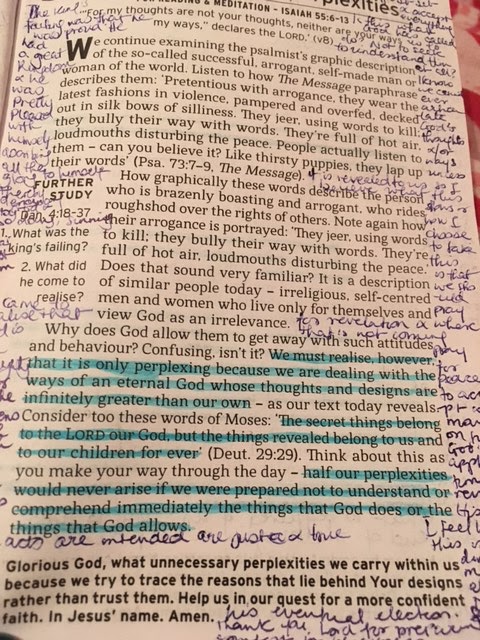 Does the description of the "person" sound like anyone we know or have had to listen to for most of this year? Most of us wondered what went wrong for the popular candidate to lose to someone such as this. If you didn't wonder, I know I did. But God had moved to allay my fears, to let me know that though I didn't know what was going on, He did. Guys, that was enough for me. I felt God's peace on this issue immediately. I'm still not a fan of dude. I flick the channel when he comes on. I may never be a fan. BUT now I know that there is a plan. Trying to untangle the plan to where I'm satisfied is me trying to match wits with an all-knowing, all-seeing God. It's a useless waste of time in my honest opinion.

What I got from this was that we tend to over-analyse issues to where we render the issues great and our God small. God is not asking us not to think, He wants us to think...and then trust. It is imperative that we understand that nothing is happening behind His back as they say. He wasn't caught unawares by all this. We need to trust then utilize prayer for the peace to accept the process till we see God's plans play out.

So if this has bugged you as it has me, I invite you to trust God and trust His process.
Posted by CherryWine at 7:08 PM