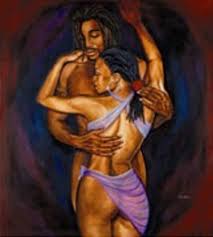 The decision I had to make was very clear.... RUN LIKE HELL!!!!  So I guess you know what I did... I decided I was going to pursue a liaison with Wande. Hey, I'm smart, not wise, plus at the end of the day, I am a man. What man could resist such a blatant come on? It takes not only a better man, but a celestial being to see the scene before my eyes and make the right decision.

I summoned my wife to a family meeting with immediate alacrity!
I informed her that having given the matter further consideration, it appeared that the best decision would be for her and Kitan to relocate to Canada. It was, afterall, the country majority of her family members live in and though it would  be tough not being with my family, giving them the best of life was my number one priority.
Motun flung her arms around me in gratitude. She did not even question my motives or the lightening speed with which I changed my mind. She automatically assumed that my reconsideration was for the reasons I had stated and why should she doubt me anyways? She kept on hammering on about how I was such a considerate man and how I know how much she needed a strong family network at this time. Yeah...yeah...yeah....all that...PLUS I need to get to know Wande away from prying eyes. I wasn't really well versed in the art of sneaking around. So, though I know I would have given it my best shot, were Motun to come back to Nigeria, it was all the more better for her to be away so there would be no interruption from any quarter. I sat there basking in my wife's love  and adoration, all the while knowing I did not deserve an iota of it.

My first port of call straight from Muritala Mohammed International Airport was Wheatbaker, where I had emailed Wande and begged her to meet with me before I left my wife and son in the US. I was very nervous. It was our first date, afterall. Let me tell you, cheating is not really a default setting for married men. The guilt is like nothing you've ever known, the thrill supplies the adrenaline to counter the grief and keep the party going though. I was as nervous as a prostitute at a Bishops' convention. I kept fidgeting and a thousand thoughts ran across my mind. Have I been stood up? Worse still, have I been set up? Is Wande feeling me?

To quell my nerves, I picked up my phone and started barking orders at people. I was tapping away at my phone when I sensed Wande's presence.

I took her in from the bottom up.

Black patent high heel shoes went up to legs that went on for days. I still marvel at how many ways I could twist those unusually long legs around my person, the legs were cut off not a minute too soon by a tight, purple dress that just barely covered her crotch. Tapered waist gave way to a luscious set of breast with the creamy tops peaking out from a deep vee. I had been scammed out of many hundreds of thousands of Naira many times by hair hawkers to know that her wavy hair was the highest caliber of hair from some part of South America or Asia. Her face was more gorgeous than I remembered.

She smiled at me and sat down with flourish, throwing  one impossibly long leg over the other.

"So" she began  "Ï'm guessing you liked my picture". The ice was well and truly broken and from all indications, so was my marriage.

After that, things progressed at the speed of sound. Wande and I ended up spending the night together. I don't know what I have been doing for thirty odd years of my life but I would say Wande was my introduction to sex. Sex took on a new meaning. I learnt new things. I mean, for crying out loud, I know what anal beads are used for !!!!! The illicit nature of the affair added to the 'can't get enough' factor. Wande and I went everywhere together and I damned the consequences. Sometimes, we would run into Motun's friends at clubs, restaurants etc and I would explain her away as my cousin. I did have a cousin that had some similar features so it was easy to use that line. Some of these chicks were unconvinced and would call Motun who would reassure them that Wande really was my cousin, Jibike and she would call me and we would joke about it. I could tell that the farthest thing from Motun's mind was that I would cheat on her.

If she only knew.