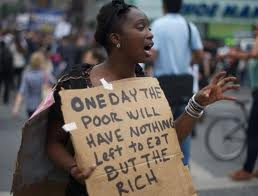 I am not much of an activist. I have strong views and opinions that I express to friends and all those who care to listen but I've never been much of an activist. I approach life most times with light hearted whimsy. But there is nothing light hearted or whimsical about the issues affecting Nigeria today. Our government in their infinite foolishness have decided that of all the issues affecting Nigeria such as insecurity, wide spread poverty, the national embarrassment that is inadequate power supply amongst others; the removal of fuel subsidy is the next thing to tackle in a New Year.

The government of President Goodluck Jonathan greeted Nigerians with the news that petrol will now cost 140 naira per litre from the previous 65 naira per litre. A more than 100% increase. I watched the Finance Minister and other mouth pieces of the government on Channels TV attempting to rationalise this massive rape committed on all Nigerian people. She had all sorts of charts and figures to show that we were getting it 'good' in Nigeria. The undertone of her speech was that the government was practically doing us a favour. She compared us to other oil producing countries like Saudi Arabia and insisted we were still getting the fuel cheaper than they were in those countries. I said to my father that the ONLY statistic they weren't showing which was perhaps, the most important, is the fact that 90% of Nigerian live on $1 or less a day (please note that the Naira has now fallen way below the Dollar so perhaps, the correct figure is now about $0.88 per day. But that is a topic for another day)

How do you justify putting the price of fuel at 140 Naira when people are LIVING on 150 Naira PER DAY? Is this a government of the people,for the people, by the people? How does a government in a democracy justify spending over a Trillion Naira on its own expenses and stating that it is unable to afford 160 million Nigerians the same privilege? This move has shown Nigerians that we are literally on our own. We have to fight our own battles by ourselves because the people we have elected into government are simply there for self enrichment and self aggrandisement. How dare the Federal Government of Nigeria remove the only thing we benefit from petrol as an oil producing country? In the program where Okonjo-Iweala was highlighting the benefits of removal of subsidy, she failed to acknowledge the domino effect of such removal. The knock on effect of removal of subsidy is that EVERYTHING becomes more expensive. So everything the average man living on 150 Naira a day needs for his daily living has shot up by 100%. Gala as at 2 weeks ago cost 50 Naira. My cousin's colleague as at last week was told that Gala now costs 110 Naira. I haven't received the figures of the cost of rice, garri, beans and oil. Yet our President needs 1 Billion Naira to feed his family this year. 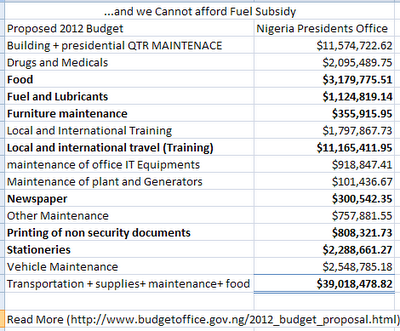 They keep harping on about a cabal that is benefitting from oil subsidy. The removal of subsidy is supposed to smoke out this phantom cabal. Removing subsidy does not assure me as a Nigerian that the executive is doing its job in curbing the cabal. All it tells me is that I am being punished for the incompetence of my government. To add insult to injury, the President came on TV yesterday to highlight 'palliative' measures to cushion the removal of fuel subsidy. Palliative for who? 1600 buses, 2 per Local Government Area for 160 Million people. 25% cut in basic salary for all those in power. What about the allowances they are all 'entitled' to? Reduction in foreign travel and entourage size. Yet he is South Afrca and has taken 2 Planes to 'accomplish' the trip. In a third world country, a finance Minister is earning as much as the President of the United State if not more and yet it is not feasible to allow Nigerians the one consolation they were getting from being an oil producing country. We have not been told that the subsidy will be applied to the development of the refineries in Nigeria. They just said the money will be applied to development programs. Where have we heard that before? They keep 'proposing programs' they never 'initiate' or 'complete' programs.

That speech was an insult to my sensibilities as a Nigerian. It was forced, insensitive, lacked any empathy for the plight of Nigerians. It was a speech that was clubbed together by a Government that was for the first time in recent history facing a showdown by a fed up citizenry. Nigerians are an accommodating people. We have put up with successive incompetent dispensations. Terrible after bad governance, mediocre leadership, harsh policies, wanton greed and corruption. We have kept quiet and suffered in silence. We have been unified by this cause much to the surprise of our leaders.

Brothers and sisters, I am a stakeholder in Nigeria. Nigeria belongs to me and my children unborn. We own this country yet we are being taxed for fuel by a government that is asking us to make sacrifices whilst being unwilling to make any. These people in Government work for us and until they understand that, we will not move forward. I am livid. I have bought petrol for the new unsubsidized price. A government that is so far removed from the plight of the people, I repeat, is a government that we cannot reckon with. Sanusi Lamido, CBN Governor, admitted to not remembering the last time he bought fuel. I remember the last time I bought fuel before the subsidy was removed. I paid 3500 Naira to fill up my tank. It is now double that price and we are being enjoined not to Occupy Nigeria. His declaration shows clearly that our government lives in Narnia whilst we live in the real world. They have distanced themselves from the suffering of the masses the way a two year old sticks his fingers in his ears to avoid hearing what you have to say. Our government is delusional if they believe that this removal of subsidy is for the benefit of Nigeria.

We must stand up for our rights. The time for a revolution is now. Sadly, this revolution will not be televised. At least not by local media. This protest has unmasked the true face of this government. A government that encroaches on free media is a dictatorship. I voted for a democracy.I suggest that we all arm ourselves with a copy of the constitution and begin to take proactive steps towards taking back our fatherland. Know your rights within the constitution. It is your right to recall a law maker that is not representing your interest in the Legislature. Recall your Senators or House of Reps members if they are not doing the job for which they were elected. Sitting allowances and furniture allowances were not the reasons you put them in power. Things have come to a head now. Fuel subsidy has opened the floodgates for all the grievances we need to air and have addressed. This window of opportunity must be effectively utilised before it closes. We must not get suckered in by false promises and false hopes. The mantle of revolution has now fallen upon us. I support the Occupy Nigeria movement, I support an organised Civil disobedience. I support my right to speak my mind without fear of sanctions. I support being free from insecurity in my own country. I am disgusted by a government that wants to silence me, a government that is steeped in wanton waste of resources whilst the common man wastes away on the streets, that frolicks in illegality and unpatriotic policies. My impassioned plea to the Nigerian people is not to let the government get away with this injustice. If you are a blogger and/or you support the movement, here is what you do:

1. Do a similar post of your own on your blog using the title "GEJ Presidential Palace Subsidy Must End: Nigerian Bloggers' Protest"
2. Add the pic/tabled diagram in this post
3. Publish your post today or latest by tomorrow
4. Please allow for seven days on your blog or place in a prime position on your blog for seven days.
5. You can still play your part as a non-blogger: share on facebook, twitter and other relevant social media.
6. Journalists, use your media space.
7. If you've done a post or published elsewhere online, please leave a link at  Naijalines Thanks.

Posted by CherryWine at 4:51 PM