Day 3: Activities I'd Do If I Was Brave Enough 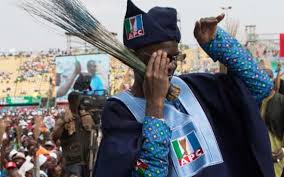 So how I've decided to approach these 30 days is that I will post topics I want to discuss but I will also use available online resources that have identified topics for these sort of challenges, as prompts for when I'm stuck.

I'm a bit stuck today so I'm using one of the prompts.

Today, I'm talking about activites I'd do if I were brave enough.

Those who know me, know that I live by the ethos eni ti o niýa o kin dégbo eyin. The verbatim translation of this is that a person without a mother avoids sustaining injuries in his back. Loosely translated, this means that I dun used to play rough play. People have tried to force me to play these rough plays from time to time. It always ends badly...mainly for their rep because I will disgrace you with my Yoruba shouts for help. Maybe one day, I will share the story of how a ride was stopped at an amusement park so I could get off and stop agitating other revelers.

Anyways, if I were a fan of rough play, here are 5 things I would actually love to do. 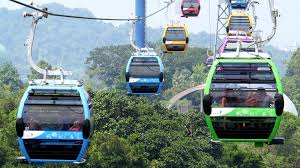 This, I may actually wind up doing.

See, I've convinced myself that I have a phobia for being in the air. How then, do I commute from my base to other parts of the country/world, you ask? Well that is achieved with the power of prayers, pep talks and laying of hands on the plane when we pass through spots of turbulence. Don't ask me how that works...it just does.

Anyways, I've decided that if I must get on a cable car and tick it off my bucket list, I would only do so in a country with stable power supply.

They said Lagos State was considering the cable car option for the Apapa to Lagos Island corridor. I laughed in Okiti-Pupa. That's how somebody will be dangling in the air somewhere around CMS with no help in sight when NEPA strikes. My village people cannot get me so easily. To avoid small traffic...

2. Riding a Roller-Coaster
Kindly note: By roller coaster, I am referring to the monstrosity pictured above and any other contraption that swings, drops or whatever and moves really fast in an up and down, twisty or circular motion.

My earliest memory of roller coasters was riding one of those elephants that go in a circular motion and drops really fast at Trans Amusement Park, when I was a kid. As you know, you do as you are told as a child. I was forced to ride the stuff and I rewarded those below with a spray of chunks of my breakfast. The hatred was born.

The nearest I came to a roller coaster in recent times,was a pirate ship and it had to be stopped for me to get down because I refused to have decorum in (what I perceived to be) the face of death! Oh and a simulation of the hangman drop at the London Dungeon.

Roller-Coasters just do not look fun. They look like something cooked up in the fires of Mordor. The human body could not have been designed to withstand such twists, turns, dips and drops. But people...crazy people, no doubt...seem to have fun on them. I know that I would literally shit my pants if I got on one. My fear is not irrational.I know this for two reasons:
a, The chairoplane incident where the pole of a ride aptly named chairoplane, crumbled, the chairs detached and people were flung across the field.
b. About two years ago when a friend reported that someone died in Six Flags on one of their roller-coasters.
I don't need any more proof so yes, I am not brave enough to go on a roller coaster...not even for all the tea in China.

3. Sky Diving.
I haven't even finished doing all the activities on the ground, it is the one in the sky I want to go and be doing. The devil is a bloodclat liar!!!! Again, I have a fear of being in the air. I'm sure clever people know the name  of the phobia. I call it YouAreMadAndYouHaveNoOneToTellYou-phobia. I think I may actually enjoy the wind in my weave-on but I also know that if I on OX fan to the highest, I can simulate that same wind in my father's house without fear of my brains being splattered on an expressway somewhere. 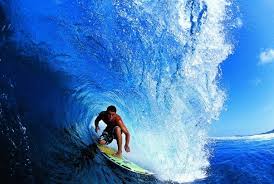 So I used to take swimming lessons when I was 6 but my mother stopped the lessons. I've only just began to swim again in the last two years. Generally, I don't mess with water that is more than a bucket. But since I've started learning to swim again, I have a new rule - I don't mess with water that I'm not able to stand in and poke my head out of. This, as you can deduce, has severely affected my swimming lessons because I'm forever in the shallow end and I stay standing in the water. It's like you want to be judging me, well...
Anyways, I know you can tell that it is not my type that they are looking for where they are surfing. The water just looks inviting but maybe it is mamiwater trying to deceive me with blue water and lure me to my death. Impossicant! I am covered by the blood!!!!! This does look tremendously fun though if it weren't certain that I'd drink one GeePee tank full of water before I am finally rescued. I don't need that hassle...neither do the unfortunate life guards that would have to rescue me. 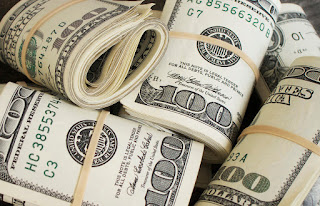 Dearly beloved, yes...this is an extreme sport, if you don't know. I'm not talking about "do you have 10k there?" kind of borrowing. I'm talking about the type of bad loans that ended Intercontinental Bank. The one that AMCON will come in and seize everything including your family name...ok, maybe not that deep, but you get the point.

I have a very low risk appetite as a person. It is a problem sometimes but it has also helped me too. I admire people that walk up to family or friends or even the bank to say "do you have 5 Million Nera dat you are not using?" With that kind of gbese, I will not even be able to sleep. My neck will be long like giraffe, you will think I have HIV you will not know that it is common loan I collected. Some people will now go a step further and gamble that money...and then lose! Jus kee me!!!

A friend told me about some guys we know that borrowed money to play the forex market and ended up getting swindled. One borrowed 40 Million Naira. 40. Million. Sweet. NairaS.
I would love to carry money and go to Vegas and go and do laulau there in the name of gambling but the way my account is set up...ATM will not dispense money to me if it senses foolishness in the horizon. Then also, dollar is just carrying shoulders up anyhow these days and I have agreed once and for all that dollar is not my mate. With these few points of mine, I cannot partake in borrowing and/or gambling.

So what are some of the things you would like to do but for the way your life is set up?
Posted by CherryWine at 11:06 PM