Y'all it's been a rollercoaster. I was in Lagos for over a month, working. I was reminded, in the strongest possible terms, why I now work in Abuja. For those of you that have to live in Lagos, my deepest condolences. Don't get me wrong, Lagos is forever bae! But Abuja is my side piece right now and I am full on loving it. Easy like Sunday morning, twenty minutes (max!) commute to work, the potential of hobnobbing with all the newly rich boys that have been imported from Lagos following the APC win, really...what's not to love? Lagos can suck it! I still love you tho, Lagos, but we ain't like that no mo'.

See folks are straight up trifling these days and it mustn't be allowed to continue.

Let me tell you a licckle story.

I had this cute, young friend at the beginning of last year. He was cool peoples. One day, I was dulling at home, as per usual and he came to invite me to hangout. As we were hanging out, something was clearly bothering him. Eventually he blurted out that he was in a sort of situation and he needed to discuss it with someone. "Well, I'm someone" sez I. So the story began.

He had a colleague at work. Young girl, in her mid twenties. She was married to a guy either in his latest thirties or very early forties. They got married in her early twenties and had been married for three or five years, I really can't recall right now. Anyways, the long story short is homegirl was not happy. We've heard this story before from the two divides of the gender...so yawn! But what was interesting was hearing it from a guy's perspective.

Most ladies I know, my humble self included, have been approached with this mess. Some ho-ass man starts wanting to make you feel sorry for him because he is in a "hellish" marriage. Most women know this is a gimmick. This fool's marriage is paradise, he's just outchea trawling for tail and you fall for that mess at your own risk. Caveat emptor, people. But it was strange to see that men had not gotten that memo yet  . My young friend was furious on this lil' fast girl's behalf!!!!

Do you guys watch a lot of CI and Investigation Discovery? I do. There's a show called Crimes of Passion, I believe, on the Investigation Discovery channel, where they show how some people get killed by spouses or significant others out of  "love", hurt, or whatnot. The themes are usually similar, though the stories are different. A pretty recurrent theme is usually some young boy killing his girlfriend's husband/fiancé/boyfriend/betrothed.  I often wonder what would lead a young man with his entire life ahead of him, to decide that some toothless old crone was worth the risk of going to jail and being labelled a murderer. I finally saw first hand, what could make a guy make such decision.

It's the Cap'n Save A Ho syndrome. 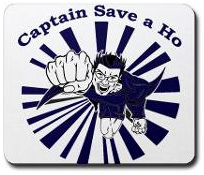 People, we've been told that guys like to feel needed. This goes beyond lifting stuff, opening doors and screwing light bulbs. There's a primitive nature in men that makes them want to fight other men because of women. See the case of Helen of Troy. My little friend was ready to do battle on this girl's behalf. He was saying how the guy was not treating her right. How he tricked her into an early marriage and was mistreating her. How unfair the whole thing was. How the girl was such a sweet person. Yadayadayada. Cry me Ogun River!   I waited patiently for him to finish while trying really hard not to laugh in his stupid face.

He had to be schooled y'all. And schooled he was.

Guys, not every girl is a damsel in distress. You need to know this. You can't rescue everyone, but bless your kind soul for having the inclination to. My take on this was, if this lil' fast girl went and got married, she needs to not be looking for how to drag other innocent bystanders into her marital mess. I was like if she was unhappy in the marriage, there was a way out for her. It is called a dissolution of marriage also known as Divorce. She should take her ass to the court, file her papers, serve the man and call it a day. The thing is if her life were in danger, to where the guy was abusive etc, she won't have eye to be checking for a young man to have a dalliance with. She would be too scared and unsettled to be stepping to you and asking for the D. The truth is, this girl was just bored. Marriage wasn't all she thought it would be cracked up to be and now she's bored. Plus that's her side of the story. I asked him if she had spoken to her husband about how she felt and he said no. My thing is, that's someone's wife. Regardless of her "unhappiness" she is still a married woman. You can't be messing with her. If you want to catch a guy, just put a mirror to him. I asked him how he'd feel if his wife was going behind his back to cry on some young boy's shoulders about things he may even have no idea about. That gave him pause.

It then occurred to me that this guy's righteous indignation went beyond just being told some stories over time. He sounded pretty invested. So I asked if he had "gotten together" with the girl. He said they had kissed. I don't know if truthfully, this was all they had done because at this point, he was realizing that he had gotten got, so the information wasn't free flowing as it had been. Well, I wasn't surprised. What surprised me was that the last time I saw  him, he was gushing over some girl he met at a wedding. He went as far as to say he had seen the girl he wanted to marry. A few short weeks later, this lil' fast girl had built the first level of a duplex in his brain. Women, I hail you!!!!!

But seriously guys, you can't help someone be a painkiller for a bad marriage. The solutions to a bad marriage are counselling and/or dissolution. They can't ride you (pun intended) through a rough patch in their marriage.  From the way the story was told, she didn't sound like she had any real marital problems other than the fact that she had married young and would still rather be a baby girl out and about instead of a wife and a mother.  So I personally didn't see a favourable outcome to this story for my friend (or even the girl, but we are not talking about her right now). The girl was going to lead him by the nose till she felt guilty, dump him and scamper back to the safety of her husband's arms.

This story is not peculiar to this boy. I've heard many variations that straight up pissed me off. A popular one which is most prevalent on the dating scene, that even I had used in the past, is "if I wasn't with him, I'd totally be with you. You are so great and he is so awful. I don't know what I ever saw in him". AND YOU GUYS BELIEVE US??????? REALLY?????? When was the last time a woman let a good man go to waste and choose to be with an ass instead of a correct guy? If this sounds familiar, uncu, wo ti gbe yin m'ora!!! She is playing you, playa. Keeping you on the back burner, in case the guy she's with messes up. This post is not really about the girl in a relationship but the one in a marriage. I just wanted to point out that this stuff has variances and for you all to stay woke!

That was an aside. Back to what I was saying.

A word to the wise: don't let any married girl (or guy) suck you into a mess with some cock and bull sob story. If he or she is unhappy, you can contact me. I know a bunch of bomb-ass lawyers that will handle the divorce at  reasonable rate. DO NOT START MESSING WITH THESE HEAUX UNTIL YOU SEE A DECREE ABSOLUTE, ya'hear? And gentlemen, wise up. We love that you have a protective instinct and you ain't afraid to use it but you have other instincts too. Don't let your protective instinct and your libido guide your decision making and you go rushing to save these people who just want to play with your emotions. It's people like these that leave relationships sad, battered and beaten, down and out, then get all up in their feelings and ride around in cars with bumper sticker like "All Women Ain't Shit!". Listen to your gut instinct. That little guy knows these things. Conduct some due diligence before rushing to save some chick and ending up with a belly full of bullets.
Women, I know you know these things and you don't need to be told twice. This is just a refresher course for y'all, right? Ok. Good.

NB: Thank you all for your well wishes on my birthday. They were truly appreciated and made my day.

Posted by CherryWine at 3:11 PM