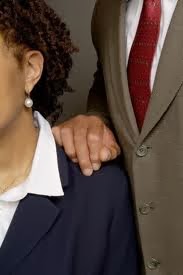 One of the things that shocked me the most about RIO's indecent proposal wasn't the harassment itself but people's reaction to it. Nobody was able to provide me with a workable solution that did not involve losing my job, giving in to RIO or just praying it away.

Everyone I discussed it with failed to take cognizance of the crippling fear I felt or the accompanying helplessness. I took to looking both ways before I stepped foot anywhere. I   imagined that every man who was speaking out of my peripheral vision was RIO. I didn't want to stand at the elevator bank for too long waiting for a lift cos I felt there was no better way to be a sitting duck. I would often walk 12 floors up or down just to avoid running into RIO at the elevators. My home was no longer a sanctuary. If my phone rang, I jumped out of my skin fearing it was RIO on the other end waiting to threaten me or cajole me, whatever mode took his fancy. He has twice sent his driver to pick me up for a get-away. The first time, the gate man turned him away, the second time he made it as far as the front door of the hostel room I lived in with my cousin, Ibiere, in Yaba. My cousin told him I had gone to spend the weekend with my parents in Ikorodu. RIO was officially stalking me and using classified, official information to do so.

After the second visit,my cousin had what she considered a 'heart to heart' with me.

Ibiere: Two ( She was also called IB. But because she was a few months older, she was IB One and I was IB Two, so we affectionately called each other One and Two) this your oga situation, what do you want to do about it ?

Me: One, walahi, if I say I know, I am lying to you. I am hoping to keep avoiding him till he thinks I'm a long thing and eventually looses interest.

Ibiere: But Two, is what the bobo offering you necessarily a bad thing?

Ibiere: Listen, I'm sure in that your bank, there are plenty girls that will jump at such an opportunity. Think of the career advancement potentials. You better not dull yourself with your goody two shoes behavior. Turn the situation to your advantage

Me: (finally finding my voice) One!!!!!!!!!! You know me better than most. How could you suggest such a thing??? That's someone else's husband! I spend night and day praying for my own. How would I be able to live with myself?  Besides, this is Aristo, pure and simple. Aristo that I did not do in Uni or Law School, it is now as a woman who should know better that I should be running around doing runz??? God forbid. The Lord will teach me how to overcome. Till then, I proceed with my strategy. If you don't have any better advice, abeg,free me.

Ibiere: (mocking me) aristo that I didn't do when I was in Uni...my dear, the best time to plant a tree was 10 years ago, the second best time is now. Use this to your advantage. This one that you are still shacking  the man, you better get in there. Collect money for masters, money to rent and stock a shop, money for better apartment that we can live in and stop being such a dullard. I have said my own. You've not even 'greed he is already using iphone 5s to declare. If you now 'gree nko? I see trips in our future.

Me: Our future? But it is my own workshop that is getting battered? Please One, I beg you, take the offer instead of me then I can be seeing trips in our future too. Till then, thank you for your advice but no thanks.

I spoke to my pastor's wife about it but I substituted myself with a confused friend who was in the same situation. No prizes for guessing what her advice was.

Mummy Pastor: Sister IB, your friend must hold on to God's unchanging hands. She must pray and fast seriously. As I am reading the situation, there is more to it than meets the eyes. This man must want to use her for something...(Yes...sex..I thought to myself)...something diabolical. If that's not it,then it is a generational curse or familiar spirit on her side. She must pray and you must all pray with her.

In my quest for a really tangible solution, I approached my boss. Ms. Okenla is a no nonsense, never before married 52 year old. She's famous for dishing it hot to any and everybody and has once gone toe to toe with RIO at a Shareholders'meeting. He ended up walking her out of the meeting but not without her delivering eternal jabs of her own that have gone down in Cityfield's history as a turn up for the books. This was well before my time. Because of her gruff and direct attitude, she had few friends in the Bank and co-workers were surprised she took a liking to me so quickly. I spewed the same friend story to her. She leveled an even stare at me, as if trying to figure out if I was bullshitting her. I tried to meet her eyes and not give anything away. After a while, she literally just exploded

Ms. O: These foolish men in this country!!!!They think every woman junior to them is there to serve their base needs. I am so sick of this country and its lax or non-existent sexual harassment laws. Such a man should be castrated!!!! Oloshi!!!! IB, your friend needs to take the power back. The only thing he has over her is the threat of her being fired for not capitulating abi? Then she needs to walk into his office, slam down her resignation letter and give him a serious dressing down. One he would never forget for the duration of his miserable life. Agbaya oshi. IB, you won't believe that this is my 10th job since I graduated law school. People think I just had wanderlust but I have been sexually harassed everywhere I worked (Ms. Okenla is very curvy and for 52, she doesn't look a day under 38). I always made sure to disgrace the man and walk out. I was lucky that  many people respected my dad ( a retired Chief Justice of the Federation) so getting a new job was always easy. But I didn't put up with the harassment. Why should I??? No one can hold a job over my head in a bid to subdue me! No one!!!

She was panting when she finished.

Well, that was great advice. Only two things; it had taken me 5 years to secure this job and my dad was a retired civil servant. I really couldn't afford to dress anyone down. At least not right now.

Where do I go from here?

Posted by CherryWine at 7:40 PM