After my long absence, I have decided to return to the fray with a controversial topic. I'm sure you're wondering where this post is going. Just bear with me.

Is it just me or are there just like 100 dark skinned girls left in Lagos????  In the last couple of years...say 4/5 years now... I've noticed that the population Lagos girls have grown progressively lighter. I no longer recognize some people I went to secondary school with cos...well...they were dark back in the days! Everyone is now so light...no scrap that (as it is an insult to naturally fair ladies)...yellow and add the mandatory scary-inches human hair to the equation and you have armies of look-alike mammy waters wandering around Lagos. The dark skin is under attack and it is being eradicated on a daily basis. 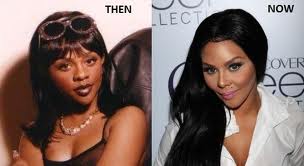 I go to weddings and what I see is the stuff of nightmares. I see a girl, her face is so yellow she looks like she's jaundiced, her eye brows are arched to perfection, if she blinks fast enough, she may levitate with the length and volume of her fake eyelashes, some blush on her cheeks and she's sporting the mandatory ruby red lips coated with the Lagos girl must have lipstick, ruby woo by MAC if you don't own one, you will be run out of Lagos and your family shamed!!! . Here's where it becomes scary, I realize this girl is not a gremlin that has been near water and thus multiplied, but DIFFERENT GIRLS! evidenced by their different dresses and eye shadow colors and the different ways they have chosen to wear their obligatory human hair.

Do these scary B-words know they look alike and their faces frighten little children and me?When did we get so obsessed with reversing our skin color in the name of beauty?  What informed this decision? I was so concerned about this trend, I discussed it with a guy friend. His comment was startling and a revelation. Friends, I am what you call a brown skin. I have never harbored any desire to be yellow. My sister, W, is a dark chocolate. She is gorgeous!!! I'm surrounded by beautiful, dark skinned women and altering my skin color has never held any appeal to me. I am one of those that feel light skinned girls are attractive but very rarely pretty. It is not beef, but fact. I won't even date a light skinned guy cos I think they are too effeminate. These are just my personal 'prejudices', if you please.  So when I spoke to this guy, it was with a view of ascertaining why women felt that 'yellow' was synonymous with beautiful and if there was something fundamentally wrong with me for being content with my dark skin.

Conversation 2:
"Guy, I just met this babe! Mehn, she is fine and she set die, she come fair small".

This blew my mind in ways I can't articulate in words. I mean, I understand preference, but I couldn't believe what I was hearing. Could this be the driving force behind the madness???I said to him that flowing from his 'norm'argument, dark skinned girls should be the 'ín things' now as they are more or less extinct. He just laughed. My off the cuff comment has proven to be more than just a hunch following two encounters I had and the remarks from those encounters.

I was hanging out with an ex of mine sometime last year and I was teasing him about his girls, saying I was sure after our break up, his current squeeze was a yellow, peruvian hair wearing babe (the conversation was funnier cos it was in yoruba) and he goes 'mi o ma le stand awon chemical girls yen' translation: Í can't stand those chemical girls. That was his name for girls that 'turned yellow'and it is the inspiration for the title of this post. I laughed long and hard.  My second encounter was with a friend I had been trying to set up for a while. I was describing an acquaintance to him as a potential girlfriend and I got to 'she's fair'and he said 'mi o fe omo pupa to ti bleach'. Which essentially meant he was averse to girls that decide to turn yellow. This then begged the question:who dates these girls????

I've been informed that this is a cost intensive enterprise and the vendors of the products are laughing all the way to the bank due to brisk business. My dark skin wishes it was so lucky that I would buy it tons of creams and soaps totaling thousands to keep it looking black. I am a huge fan of vasiline and I have used jelly in various forms for as long as I can remember.

There were some scarific pictures of two ladies making the rounds a while ago and there were lots of comments on that picture. See picture hereunder (viewers'discretion is advised) 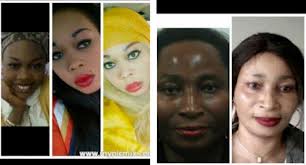 My only thought was 'these idiots paid money to look like THAT??? They've been duped!'. It remains a mystery.

But the propaganda of lighter being better has been subliminally passed across in the media. Before our very eyes, Beyonce went from a mocha to a vanilla latte. Music videos have gradually phased out dark skinned girls (I've taken to counting the dark girls I find in videos). You have artistes like Lil'Wayne openly declaring their desire to be with a 'red bone' even though you can tell their ancestors were 'field n****s' far away in the plantation picking cotton and nowhere near the Masser's house . On the home front, these clowns are on yachts parading with a bevy of white women. There's a song by an artiste known as 'Sexy Steele'a frankly disgusting creature, dedicated to South African girls and the video was filled with medium light to white women. The list goes on and on. The pressure is on and there's a temptation to second guess your skin color.  What are your thoughts on this chemical craze? Is lighter finer? Is bleached skin the new face of the African woman?