Hey my cherrybugs. Sorry for the moment of silence. I was very thrown and deeply saddened by the Dana Air crash. It really hit close to home cos firstly, though I didn't personally know anyone on the flight, I knew a few people who lost close relatives and friends, secondly, my entire family flies Dana strictly like they pay us or give us miles and those in the know know how frequent my Lagos to Abuja trips were. Whilst I thank God for his mercies, I deeply sympathize with those that lost people. May God grant repose to the departed souls and comfort those who were left behind. Amen.

I really felt writing something witty at this dark time in our nation's history was disrespectful to the recently departed but I gave myself a pep talk; honoring the dead is a solemn obligation that is done from within. So as an apology for being incommunicado these few days, I have a treat for y'all this week; a post from a guest writer and potentially my giveaway. Still musing over what to do for the giveaway. Shout out to @ilola for personally autographing the copies of the giveaway book. Guys, she is wickedly cool! I met her in person and I'm still in awe.

So our guest today is my awesome sauce sister, W. She has written this piece about one of the things that grinds her gear; Proposals. @ilola, you thought I was mean, well here's my sister doing it the CherryChatter way.

Take it away W

I had decided to come on here and abuse my guest privileges by being all judgy of people I consider stupid (based on my self made and sometimes socially accepted logic) but I have been getting right with the Lord  and this week on my 'Everyday with Jesus' there has been a lot about not judging and burying our criticisms (Matt: 5&7 if you're interested) which is lucky for all and sundry.
The devotional also touched base on not being controlled by passion and wrapping your criticism in love. This gives me ample wriggle room to 'cherrychat' about my topic of choice: Marriage and Proposals; wrapping all that criticism in love just for you guys! 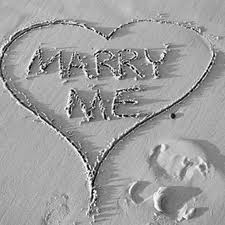 We all know that marriage is the new Louboutin and that rock on your finger, well depending on its size and who you are, is the most desired accessory of all times. Like, you have to be living within a rock, or be into your own sex, for you not to know this! One weekend, my friend had to ask if there was anyone left single in Lagos, as it seemed everyone got married that weekend. I challenge you to mention one weekend where someone you know or someone-that-someone-you-know-knows wasn't getting married (if you're accepting, please do so in the Barney Stinson way by replying; Challenge Accepted!.....then proceed to mention the weekend date)


I'm not a man hater or anything, I do love the brothers. But men be taking the piss! I have a friend who counts on me to bash men (which I rarely do) He says I jump on every opportunity to. But the simple, undiluted truth is men are kinda, sorta, STUPID (no offense intended guys). There is a youtube video that says this more offensively and creatively than I ever could. (if interested; search men are stupid...it's a hoot and a half)Anyways, I say men are stupid because as much as I hate to admit it, for most women, men still hold the power when it comes to deciding relationship status or even pursuing one. Women are getting more liberated, asking guys out, going for what they want etc...yes...but honestly, I feel that is the reason there i a whole lot of cheating and dishonesty going on. Ladies going around being spartan bitches, making googley eyes at other women's men all in the name of I know what I want. Eyin babes, e behave naw. If there were no women to cheat with, men would be left to cheat with themselves, animals, object...the list is endless. Some of them might like it and it sure does put a mile on my face...but I digress.

Men have the biological upper hand when it comes to begging. Yes, begging. I said it! I use begging cos most guys often forget they actually chased after you and begged for a relationship and act the fool. Guys. let's not forget, ok? I feel if you kept that in mind, you would act right more often. Consider the work man! Anyways, they have something built in that makes them the askers: 'will you go out with me?', 'wanna go away for the weekend?' and most importantly, 'will you MARRY ME?'As bold and advanced as women have gotten, we have not reached the 'let's do the proposing' stage. So guys are still winning on that front...I can imagine not for long as babes wan marry gaaan these days.

This is why I don't understand why a man who is not absolutely certain about the woman he wants to marry, will get down on one knee and beg to be married to a girl he's just about 50% sure of. You don't need 100% surety, marriage is not Accounting, but you need to be at least 95% sure. Let's take a minute to consider the steps involved after she says yes:

My question is why? kilode? pourquoi? oginni? Why propose and go through all that?You get married and kasala burst then you say “I WAS NOT READY TO MARRY”!


Ogbeni park well! Its a stupid excuse and an unfair one. Divorce and separations are so rampant it is ridiculous. "I was pressured to propose", "she rushed me", "my mother wanted grand kids" ( of which we all know marriage is not necessary for this, it is advised though), and worst of all, "all my friends are married" are some of the 'genius' excuses we've heard. One of my high school seniors got married to this dude, it lasted two- three months! Homeboy forgot he had done the bended knee and was still trying to live young, wild and free. How unfair is that?

Married at 25, divorced at 25 kilode? These are all signs of immaturity.

If the moment your knee hits the ground your first thought is  "crap!!! TF am I doing???!!!" Ogbeni, get up and say 'April fool!' regardless of what month it is. If she doesn't break up with you after that, please tell her you cheated a week later. If she still doesn't break up with you...rethink that proposal and do it again she is obviously going to stick with you through your silliness or run she is crazy. My point is you never have to go through with it, if you do not ask she can not say YES!


To make it worse they go around looking for pity; "My wife is not making me happy"...uncle check yourself. "I am not happily married it doesn't matter we can hang out"... aunty I shan’t judge you because I am not meant to bet....bet....check yourself. Cherry wrote a story about one uncle that was looking for sympathy after marrying a girl who now makes him unhappy and he now knows he didn't really love her,using the “all my friends were married line” . To that I say; now all you and your friends are married and you still have a problem? Dang! who would have thought joining them would not make you happy? Check with them and see if all your friends are unhappy too and make your decision based on that. I feel no sympathy for boys that play men’s games and get burnt, only for the women who thought they had married men.


Ladies, all the blame doesn't lie with the men, they may have the asking power but we still have to answer. We have the right to say NO when asked. Nobody ever got jailed for saying No to "will you marry me?" Nobody ever got badluck from that either. At the end of the day, it is STILL  a question like all others and there are always two answers to questions. I get it times are ticking and you have invested in this man, but time won’t stop ticking, it will continue ticking with this man  and supposed to be for the rest of your life! If your first thought when he starts going down on that knee is "what is he doing???!!!"  instead of "is this really happening???!!!" * OMG squeals*, please do both yourself and him a favour and say no. If you got a man that will not go down on one knee ( I lovingly say this is not acceptable), when he is standing and asking and your thought is errrm what do I say? say No or something that is non committal.


Please people do not let your passions and other people’s judgment of you push you into a commitment you can not see through, your mother wants grandkids, she can wait a little longer, your friends are married? become their wives husband number two( abeg no cause adultry o!), you want a kid? biko adopt from an orphanage, no one will judge you if you take them for deliverance. My point is people always have an idea of how other people should live their lives, but these people will not live it for you! You live for you only!


Ladies your clock is ticking, Abraham's wife gave birth at 90, abi nkan( lil rusty on my bible story), there is no rush to these things really, you have the rest of your lives to be married, happily married as it was intended. Why rush for a short, unhappy marriage and be back to square one? News flash, people will still judge you and even more so afterwards, so do not let people’s criticisms and judgement make your decisions. They forget to judge not lest they be judged as well but remember you will be judged by a higher authority if you make a mockery of holy matrimony! No be for beans they call it holy and its done infront of man and God.


Uncles, consider all the work that goes into a proposal, and begging and wedding, stop pussy-proposing to girls because they are pressuring you! That's the foundation for being a terrible husband, bows to pressure ke? Proposals are for grown men, be an adult about it or just don’t do it.


I say all these with soo much love, it is unbelievable. Thanks cherry chatter for inviting me to scribble on your page. Love you loads!

Posted by CherryWine at 3:02 PM