DAY 2: SOMETHING I FEEL STRONGLY ABOUT

This thing has been all over the news in the past couple of weeks. We all got that forward about the Nigerian man that literally butchered his wife to death on his 30th Birthday. We heard about the Nigerian High Commissioner to Kenya who brutally attacked his wife. Last week, on my way to work, it was reported that a police PR officer whose wife was stabbed to death,claimed she stabbed herself to spite him and put him in trouble. What kind of stupid story is that? I don't believe she stabbed herself, but the dead can't testify. And even if she did, I'm sure she didn't do it to spite him, but probably did it because she felt it was the only way out. 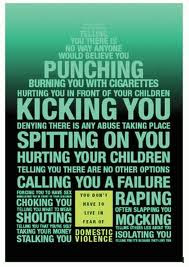 Domestic abuse is getting out of control. Abusers are getting more imaginative and crueler by the minute. It is terrifying. The numbers are scary. Speaking of numbers sef, it is just of recent that domestic abuse became something that was being reported on the news particularly spousal abuse. It has been shrouded in such secrecy and mystery because the abused bear it and believe things will get better. Abuse doesn't get better. It gets worse. In a country like Nigeria, domestic abuse is not even a blip on the radar of those in government (probably because they are abusers themselves). So proactive steps have not been taken to counter it. Some states have some laws that relate to domestic violence and child protection.These laws are at best porous and people don't take much cognizance of them. Lagos State is one of the states with relatively active laws in these regards.
Under the emulation-worthy direction of Mrs Rotimi, the Office of the Public Defender in the Lagos State Ministry of Justice is doing its best to tackle the issues of domestic abuse and child protection. But she can only do so much. People.....no.... women have accepted domestic abuse as the status quo. It is seen as a part of marriage and they don't come forward to report incidences of domestic abuse. There are a lot of reasons for this "oh, he's the father of my children" "oh, if I hadn't annoyed him he wouldn't have" "oh, I don't want people to think badly of him, he's a good man really" and on and on. This is what is known as learned helplessness and excuses. No, he's not a good man, a good man will not lay his hands on you. It makes me sick to the bottom of my stomach when I hear women blaming themselves for their men's inadequacies. 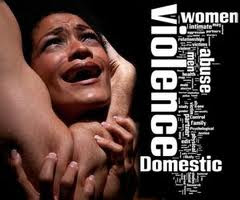 If you put up with it, you are just encouraging him to do more. I know I've said people should persevere in marriage but I'm sure I stated domestic abuse as an exception and if I didn't, well, I think it is. This has to do with you and your life and when he kills you, the children for whose sake you stayed in the marriage, are left all alone.
When I hear that women have been found dead and their husbands were the killers, I know it is domestic abuse that spiraled out of control. He must have started small and gradually increased the tempo till it eventually led to death. The main reason why incidences of domestic abuse are not reported is the shame and stigma attached to it. I took a Domestic Abuse class in my 3rd Year of uni. The lecturer Julia Giramata, was a victim of domestic abuse for more than 20 years. She only began to feel liberated when she started to speak about it. Speak to someone. You're not the one who should be ashamed, he is. A weak bastard that hits women should be ashamed of himself and his lineage. Yes, his lineage. He must have learnt this beastly attitude from somewhere. Women, we must raise men worthy of being called men. You are not a man just because you possess a penis, you are a man when you learn what men do to get respect. Hitting a woman is NOT cool and it doesn't make you a man. Let us raise a generation of REAL MEN. I have an active interest in my brother's upbringing and I've been showing and telling him some things and I pray that he turns out to be the man I want him to be.

And can I just add that physically abusing a woman is not the only way to abuse her. Verbal abuse is just as bad, if not worse than physical abuse. You look at a woman who God has made. A woman who is supposedly the bone of your bone, your helpmate, the mother of your children and you call her useless, worthless, you bring her down, you laugh at her hopes and aspirations, you don't lift a finger to build her up and you wonder what is wrong with her. You have destroyed her psyche and re-altered all those things God told her about herself and she believed. You are a terrible person worse than a murderer because you go into people's heads and kill their dreams and vision and thus assasinate their sense of self. 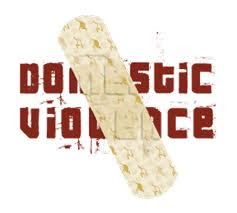 I can't stand men that abuse women. But I must also speak to the women folk. I love a long courtship because I believe it reveals things. Take time to know the man you want to marry. He can only hide himself...his true self... for so long. I heard somewhere that abusive men would reveal their true nature during courtship. It is true. He must have done something to give you a preview of his true nature. That you were 'surprised' by his action is a lie that the devil told you tell. I have heard of so many girls who in the course of a relationship were controlled, intimidated and even physically abused and still went on to marry those men. You think the bling on your finger will make him a better person???? Quite frankly, there's no 'stupider' move than that.

I feel extremely strongly about this because violence begets violence. It is a vicious and damaging cycle.If you're abused, you can't function properly, you are always jittery and miserable. If you have children, they are learning a miserable way of life from you and your partner. Let us speak out against domestic violence. It is not ok. It is never ok.
Posted by CherryWine at 8:37 AM

Email ThisBlogThis!Share to TwitterShare to FacebookShare to Pinterest
Labels: meme