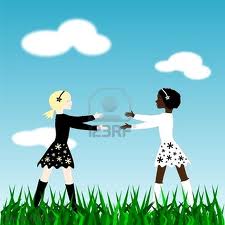 So from most of my rants, you can tell that I'm a girl's girl, a woman's woman, a chicks before bros (or hoes before bros....whichever one you prefer) kinda girl. If you couldn't tell.....well, I'm telling you. My mum, my sister, my cousins and my girl-friends are so important to me that I don't know what could possibly cause us to fall out. The thought of something just affecting our relationship so badly that we stop speaking, just freaks me out.

What is the main thing that comes between us women? Yup....you've guessed it...MEN! Oh.... you evil sons of........Lucifer! Can't live with them....can't live without them. What a terrible conundrum. Since I don't have any lesbian tendencies, I like men, but I've come to see the havoc they can wreck albeit unknowingly.

To be quite honest, the problem largely stems from us women. Women have what is known in Yoruba as "ojukokoro" which is essentially coveting that which does not belong to you.  This ojukokoro of a thing is terrible. My favorite comic of all times; Chris Rock, told a joke about this. He  said when a man meets his boy's woman, and she's everything he wants in a woman, he says to himself "damn....I have to get me a girl like her" but when a woman meets her girl's man and he's everything she has ever wanted, she says to herself "damn.... I have to get HIM"
I know a lot of women will be protesting innocence now but it is not an overly unfair assessment. Women folk are terrible. We all have that friend that you'll say "such and such is so nice and she will do anything for you but don't leave her alone with your boyfriend". I have tons of friends who are perfectly nice people but their weakness is OPM ie Other People's Men.

My aversion to OPM is legendary even to the point of people thinking I'm being too silly. My bestie, LSO had this ex who went as far as telling her to order me to date him, that he's sure if she says she's ok with it, I will say yes. It is not cos I'm an extraordinarily good person but firstly, I consider myself a seriously loyal friend and secondly, I consider a boy who is dating my friend or who has dated my friend and is still trying to holla at me, a piss-taker. Are you thinking that that is a bit extreme? Well, let me explain.

If you're dating my friend, you are completely off limits to me. Why? Cos like I said earlier, I don't consider anything (other than maybe my friend killed my family member) worth losing my friends over. It has been a painstaking process to cultivate most of my friendships, so Mr Stud is so not worth it. Secondly, you're probably doing 'stuff' with my friend, needless to say, that's just unsanitary. My strict hygiene code forbids such nastiness.
Now for those that have dated my friends, they are the most serious piss-takers. My question to you is this, were you blind before? If it was me you wanted, you should have busted a move on time. I don't care if I met you after you had already started dating my friend. The whole process just reeks of playing 'try your luck' and I don't have the luxury of such stupidity or game playing. I have had people ask me, well what if the boy you turned down for being your friend's ex is actually your heaven ordained husband? My answer is God knows me and would never do me greasy. I extend this courtesy to women I don't even know. Y'all remember my love rat KR? Well, the minute I found out about his missus, it was a wrap. I JUST DON'T KNOW HOW TO DO OPM! I hate not having exclusive rights to my things, men inclusive. Plus, I put myself in these women's shoes and wonder how I will feel if the shoe was on the other foot. Just can't do it.

That's just me, it may be a bit extreme but it is what it is. This is not even a case of the exes. The more pertinent issue is friends that will 'snatch' the boy from right under your nose. One school of thought is of the opinion that if you were such a great girlfriend, no one should be able to take your man. So you're the one who should check yourself. But I beg the proponents of this school of thought to consider a few things; this is not a scientific experiment; whether or not you are a good girlfriend should not be a hypothesis that your friend should be proving or disproving. Also, she's your friend, she should have your back and not with her own back on the ground. Ergo, she's a Ho!
I know a couple who were having issues and they had a mutual friend who they both confided in. The girlfriend was telling the friend that she suspected her boyfriend was seeing other women. And the friend kept on reassuring her that it was all in her head. Come to find later that the girlfriend's suspicions were right and the "friend" was the one knocking boots with her boyfriend. True story. How evil is that? With friends like that who needs enemies?

I envy and pity girls that manage to remain friends with such girls and say dumb crap like that was just collateral damage and that if the boy was so true to them, he would not have allowed it to happen. I agree completely. However, I believe a punishment should befit the crime and if the punishment you are metting out to the boy is banishment from your life, then let there be no favoritism. Banish the punk ass friend from your life also. Chikena! Some friends are so not worth having, I swear. My bestie is one of these type of girls. She had a childhood friend who, from the time I knew them both, had something to do with 2 of her boyfriends, was propositioning one (bad mouthing my own friend in the process) and had something with at least 5 guys she knew for a fact were actively pursuing my friend. Then you turn around and say we are friends???? Can anybody say Ho!Ho!Ho!???? This should be one of those things you can group under the axis of Treason and it should be punishable as such. 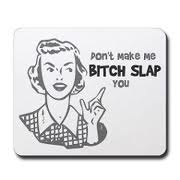 For me, it is a case of steal a man from under my nose the first time, shame on you, but steal subsequent men from me, that's just plain careless of me. So I'm like kick this B...h to the curb after we kick her ass but she kept on saying it was the boys fault. The girl tried to try it with me sef once. Now, I'm not a fighter on a normal day and certainly not over a man but there are times when you have to let people know WHAT THE REAL DEAL IS......so they don't get it twisted and then get slapped! I had to do what is known in the Yoruba circles as "fohun le"for the babe o. (Cherrictionary: Fohun le. Pronu: fo~hu~ n~le. trans. (literal)leave voice (not so literal) sound a SERIOUS note of warning)

We can't have this discussion without involving the yellow bellied excuses of manhood that partake in this crap. I just have one question for you lot: what in the name of all that is sacred is wrong with you ? How completely disrespectful! You are cheating on your girl. That in itself is terrible. Not only are you now cheating, you are doing it with your girl's friend. Ha! Nitori Olorun!!! That is a serious double whammy. That's just utterly disgusting. The girl's mind will be filled with thoughts of the number of times she has left you two alone together......all those birthdays that she had told her friend to stick to you like chewing gum before you go and buy her trainers as birthday present (side bar: get a clue guys *rolling eyes*) all those times she asked you to drop her at home etc. It is enough to cause heart attack! It is a terrible betrayal of trust from two of the people she trusts the most. And you know what is curious, men CANNOT condone it if the shoe were to be on the other foot. Hypocrites oshi. They will come with their stupid mouths to be talking about it was a mistake and how you should forgive them but they cannot forgive o. Lai lai! No time for rubbish, personally, therefore, to the left, to the left.....with your trifling ass.

Final thots: Ok, rant over. The post is my sister's keeper, not bashing the bruthas (tho y'all are trifling) I just don't understand "slack paynt" girlfriends. If you're one, I beseech you to change. Ruining someone's happiness does not guarantee your own happiness, if anything and if karma is to be believed, you're storing up unhappiness and bad fortune. If for argument sake you get the guy, to my mind, you will forever be looking over your shoulder. Yoruba people say it is the same cane they used to flog the first wife that they will use on the second wife. Even if he's not doing anything, you will be forever convinced that he's up to no good cos of what you both did. So you loose your peace of mind and also a great friend. This is for those that have a conscience sha. For some trifling beeyotches, they don't care and for those ones, this is what you need to do: before I became a refined jand girl, I went to OSU and as such, I know how to treat People's fuck ups THEREFORE just see me for lessons! Chikena! If you say you will not hear word when they are still telling you, then no problem, keep doing wrong BUT don't step outside your house o! We will be waiting for you! Mscheeeeeeeeewwwwww

P.S to those that read my blog: thanks for reading my oftentimes mindless chatter. It feels great when I hear back from you. So keep reading and LEAVE ME COMMENTS!!! Nice or otherwise. Cherrio sweeties!